Let’s start right at the end this time: it was the last of a four-day literary marathon, on the Q&A session of the final panel at Medgar Evers College, Brooklyn, New York, discussing the ins and outs of the publishing business for black writers at present, when a curved, tall man, probably in his seventies, walked up to the microphone and posed the most incisive question asked during the entire weekend: is there a need for a conference uniquely and entirely devoted to black writers? Or is it time we moved on to create a multicultural conference to deal with writers at large? The answer was categorical, passionate and unanimous: yes, there must be a safe space where black writers can develop their thoughts, raise their issues and feel sheltered.

In other words, every other year the National Black Writers Conference provides the setup for academics, professionals, amateurs and readers to come together and share their thoughts around common issues that affect their community. It is called a cultural infrastructure or establishment, and it is precisely the sort of institution that is required to promote – to encourage – the work of both new writers and old, in any section of society.

On its eleventh edition, the National Black Writers Conference was celebrated between Thursday, March 29 and Sunday, April 1, 2012, focusing on “the impact of migration, popular culture and the natural environment in the literature of black writers.” First conceived by the late John Oliver Killens, the conference had been held more or less sporadically until it moved to its present biannual format. Chaired by Dr. Brenda Greene and coordinated by Clarence Reynolds, this is the largest black writers’ conference in America and indeed the largest literary conference throughout the African Diaspora.

On this particular occasion the honored writers included Nikki Giovanni, poet and educator, whose strong, radical voice has spoken loud and clear about racial and gender prejudices in American society; Ishmael Reed, a prolific writer with an acute sense of irony that has helped him to express the palpable problems of inequality in America; Howard Dodson, academic and educator, whose positioning has been pivotal in the development of crucial institutions, such as the Schomburg Center for Research in Black Culture and, recently, Howard University’s Moorland-Spingarn Center; and Kenyan writer and academic Ngugi wa Thiong’o.

While events took place from early Thursday morning and short films were screened through Friday, the official opening of the conference was signaled by a casual ceremony celebrated in the main auditorium of the college, where Ngugi was guest speaker. It was only fitting that the honoree presented one of the highlights of the conference during its opening, as his speech subtly browsed over the origins of racial prejudice, from the colonial appropriation of land, culture and, ultimately, even the body of people in Africa, to the institutionalized discrimination that to this day can be experienced in modern societies across the planet.

Radical as it sounds, Ngugi’s delivery gained strength precisely by avoiding grand, controversial claims, linking instead commonplace and routinely behavior to a deeply ingrained consciousness of the superiority of Eurocentric values above African ones. It is this certainty, this unquestionable premise, which most alarms Ngugi wa Thiong’o, a man who has lived through the postcolonial evolution of his motherland, formerly a British colony that had to wage a long war to attain its independence. Ultimately, the African writer argued, these prejudices are responsible for traumatic reactions, such as, for instance, the assumption that Trayvon Martin, walking in a hoodie, had, perforce, to be a threat. In Ngugi’s own words, his and other writers’ duty in this day and age is to instill an ounce of doubt where that certainty reigns, in order to challenge received ideas and to prevent foregone conclusions. 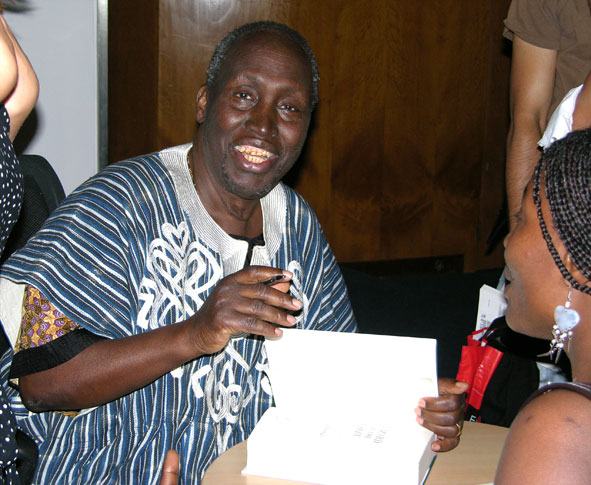 Intense as the whole weekend was, a few moments stood out for the candid nature of their emotions. One of them, unquestionably, came as the iconic poet and activist Sonia Sanchez delivered her presentation of her good friend and colleague, Ngugi wa Thiong’o. Indeed, despite the fact that Sanchez was too small for the lectern found on the stage of the auditorium, which triggered a small organizational nightmare until a more modest replacement was brought in, the moment was not stripped of its emotional charge, which climaxed when Sanchez could no longer hold back her tears, as she read a newly penned poem dedicated to Ngugi. Earlier during the same ceremony, an extensive libation set the tone to the afternoon, and, indeed, the weekend, as a small plant was produced on stage to receive a drop of water and all the good vibes from the entire congregation, while names of great precursors, from Audrey Lorde to John Oliver Killens himself, were evoked and blessed one by one with a heartfelt “Ashé.”

No celebration of black culture can be complete, however, without the rightful acknowledgement of its musical legacy. In this respect, an off-site event was promoted at a nearby venue on Friday night, where a good portion of the original members of Gil Scott-Heron’s band displayed inspirational form to both entertain and enlighten a precious few. Percussionist Larry McDonald, bassist Danny Bowens and saxophonist Bilal Sunni Ali combined with Victor Brown, the chef singer, as well as a number of guest performers, including, most significantly, poet and singer Jalal Nuriddin, to put together a set that went from the classic stirrings of Miles Davies’ “All Blues” to some of Scott-Heron’s most touching lyrics, such as “Did You Hear What They Said” and “Pieces of a Man,” memorably sung by Brown and Nuriddin.

Ultimately, the National Black Writers Conference provided an invaluable opportunity for everyone involved with black culture to get together and address matters related to the event’s main themes. Ranging from academic perspectives to practical advice, numerous panels dealt with a series of issues, such as the definition of “urban,” “street” and “Hip-Hop,” the figure of Malcolm X, the effect of migration and cultural memory on black writers, or the intricacies of getting published in the XXI century. Personally, I was privileged to be part of a panel that discussed the role of social media in the work of black writers, looking at the opportunities afforded by the digital age and at the same time analyzing the challenges posed by new forms of communication. Similarly, the program was also packed with numerous readings in all genres from figures as recognized as Elizabeth Nunez, Bernice McFadden or Opal Adisa Palmer.

Undoubtedly, these four hectic days will stay with participants and attendees alike for many nights to come. Because, to paraphrase the opening speech of William Pollard, President of the Medgar Evers College, what black writers do through their creations and their expression is to bring forward, to bring to life, to give voice to things and people that would otherwise pass unobserved. Little passed unobserved in Brooklyn last weekend, and it is that solidarity, that shared sense of belonging, which will continue to feed the pens and pads of all of those who insist in raising their tone for the voiceless. May the ruckus echo loud and strong for as long as it is necessary. In the meantime, be sure to make a note to attend the next National Black Writers Conference – I guarantee you it will be worth it!