Enigmatic—that is the word with which, after much deliberation, I would describe Julio Cortázar. One of the most renowned writers of the XX century, one of the most revered in the Hispanic world, one of the protagonists of the tremendously popular phenomenon that was the Latin American boom, and the subject of innumerable tributes in 2014, which happens to be both the thirtieth anniversary of his death (February 12, 1984) and the hundredth of his birth (August 26, 1914).

Traditionally considered an Argentinean writer, Cortázar curiously was born in Brussels and died in Paris—this fact alone serves almost as an allegory of the author’s itinerant life, of his “journey”, not quite full circle, and as an explanation—or just an excuse—for his transnational appeal. Brussels in 1914, however, was not the ideal location to raise a child, so his parents made arrangements to escape the war and move to Switzerland, first, before reaching Barcelona and, finally in 1919, Buenos Aires. Cortázar qualified as a teacher at the age of 18 and spent the next 10 years teaching in schools in the countryside around Buenos Aires before taking a position as a university lecturer in Mendoza in 1944. But Peron’s rise to power led him to give up his place in 1946 and move back to Buenos Aires, where he would be part of the capital’s literary circle until his voluntary exile to Paris in 1951.

Before leaving for Paris, though, Cortázar published Bestiario, a fascinating collection of eight mysterious, macabre and often paranoid short stories masterfully crafted with full control of structural notions and specifically designed to leave the reader hanging until the final line from a cliff that isn’t necessarily bridged by the end of the stories or even the entire collection. Over the following 35 years Cortázar would publish approximately ten other collections of short stories, but the likes of “La casa tomada” (House Taken Over), in which two siblings living in their large home are progressively estranged from the building by the sound of something unknown taking over the place, or “Carta a una señorita en París” (Letter to a Young Lady in Paris), in which the author of the letter tells the lady how he has filled her house with little bunnies he inexplicably vomits on a nightly basis, remain to this day unavoidable highlights in any anthology of his works.

In Paris Cortázar would engage in a working relationship with UNESCO, a partnership that must have afforded him some financial stability but that was also often and sometimes brutally mocked by him in his fiction, not least in his most notorious work, Hopscotch. Somewhat more enjoyable must have been the commission to translate Edgar Allan Poe’s complete works into Spanish on behalf of the University of Puerto Rico in 1953, which was then followed by two more collections of his own short stories, “Final del juego” (End of the Game, 1956) and “Las armas secretas” (The secret weapons, 1959). By then, Cortázar had already matured into a consummate storyteller and was about to hit his breakthrough.

Between 1962 and 1963 Cortázar published two of the most dissimilar, stimulating and unconventional books ever to make into the corpus of Western literature. The second one, Hopscotch, would go on to become one of the most emblematic books of its generation and an absolute must-read ever after. The first one, Historias de cronopios y famas did not become quite as notorious, but not for that is it less meritorious. As a matter of fact, the emergence of the age of social media has turned the limelight on styles of short writing that had long remained dormant and that often have been deemed “new”, such as aphorisms or short short stories. As it turns out, flash fiction is not a genre invented by the advent of Twitter, although it certainly has profited from the exposure and attention the medium has afforded it. Commercializing micro narratives in the past would have been far more difficult, but that is precisely what Cortázar, anchored on the excellent reputation of his previous collections, managed to do with his Cronopios y famas.

Form is not the only innovation promoted in this little volume of some 150 pages, though: in 1962 Cortázar was fully imbued in the concerns of Surrealism, and this is plainly evident from the material included in this collection, from his invention of new creatures to populate his world (cronopios, famas and esperanzas are mythological beings Cortázar develops with specific psychological and identity traits) to the opening instructions manual, in which the author gives a detailed account of how readers should proceed when they intend to cry, kill ants in Rome or wind up their clocks. Needless to say, Historias de cronopios y famas is a playful book, but beneath the humor and the apparent absurdity that surrounds the entire work there is a real and pressing interest in the role of the reader in literary works and the nature of associations in the way we all understand reality.

By this time Surrealism had been around for the best part of 50 years, and Cortázar had moved well beyond the movement’s initial infatuation with dreams and eroticism onto the core matter of logical thought. He questions the rationale between the most elementary associations in our daily lives and proposes instead alternatives that in appearance might seem preposterous but that, upon reflection (certainly upon his reflection), are nothing other than instances of arbitrary associations identical to every other association we make, except for the fact that they have not been endorsed by social convention.

Playful, random and disregarding of the rules: that is precisely what Hopscotch is—a piece of work on a par with Joyce’s Ulysses, and I don’t mean on literary merit (I cannot be sure, having never read Ulysses) but rather on the quasi-mystical devotion it merits from its admirers and its universal presence in all forms of literary circles, from the elite of intellectualism to the most flaunting dilettantes. If everyone who ever spoke about Hopscotch had bought the book, Cortázar (and now his heirs) would be as rich as Bill Gates; if everyone who ever bought Hopscotch had read it, Oliveira, the protagonist, would be as hip as Jesus Christ Superstar or Tommy. As it is, Cortázar was retrospectively credited with beginning the Latin American boom in ’62 with Hopscotch, and remained until the end of his life a central figure of the literary circle it generated, providing a bridge of sorts between the younger generation of Gabriel García Márquez and Carlos Fuentes, José Donoso or Mario Vargas Llosa, and the old masters, the predecessors of the boom, who were still alive, well and kicking, such as Alejo Carpentier and Juan Carlos Onetti.

International recognition would arrive at Cortázar’s door soon thereafter. In 1966 he published yet another collection of short stories, Todos los fuegos el fuego (All fires, the fire, 1966), which includes further classics in his repertoire such as “South Highway” and “The Island at Noon.” The following year an English selection of his previous collections made it to the catalogue at Pantheon Books: End of the Game and Other Stories includes some of his most accomplished tales, including “The Continuity of Parks,” “Bestiary,” “The Night Face Up,” and “The Pursuer.” Nevertheless, it would be “Blow-Up,” and not the title piece, which would become the most renowned of Cortázar’s short stories through the intervention of Michelangelo Antonioni, a daring Italian film director whose reputation in Europe was cemented but who had yet to make an English feature film. His first one was Blowup (1966), based on Cortázar’s short story, produced by film czar Carlo Ponti, filmed in the swinging London of the ’60s, starring the stunning Vanessa Redgrave, the charming David Hemmings and a Rolls-Royce Silver Cloud III DHC. Success was all but guaranteed. 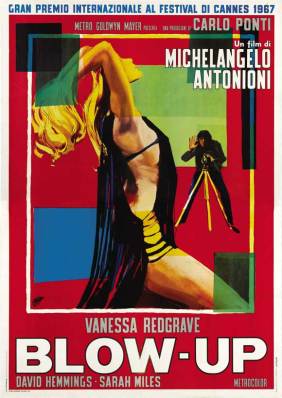 By this stage Cortázar, who had remained curiously distanced from politics through much of his life, had already sided with the Cuban revolution. He visited Havana in 1963 to be a member of the jury of the Premio Casa de las Américas and was immediately struck by the work carried out by the cultural institution under the tremendously difficult environment faced by the new government. But he found himself in the very middle of the tempestuous breakup that crippled the love affair Latin American intellectuals (and Europe’s left wing) had held with the revolution when in 1971 the Cuban poet Heberto Padilla was incarcerated for reciting his work “Provocaciones.” Cortázar, like many other writers who signed the petition to free Padilla, became persona non grata in the very country that had awoken his interest for politics.

This setback notwithstanding, he remained committed for the rest of his life to literature and to politics. He engaged in several activities in Chile, first in favor of Allende’s government, then against Pinochet, followed the Sandinista revolution in Nicaragua through first-hand experiences and was vociferous against excesses in Uruguay, in Mexico, and of course in his natal Argentina—to the point of giving up his citizenship and becoming a French national. His books would never replicate the success of Hopscotch or “Blow-Up”—how could they—and while the novel A Manual for Manuel (1973) earned him the Prix Medicis in France in 1974 he was never recognized in his lifetime with any major literary awards. He died in Paris at the age of 69, having lost his third wife, Carol Dunlop, two years earlier, saddened by her departure, fettered by the absence of his partner in the continuous hopscotching that was his life, and affected by an illness that started with a gastrointestinal hemorrhage and for years was identified as leukemia, although recent speculation points towards AIDS as the cause of his death, reportedly contracted from a blood transfusion to treat his stomach issues.

Whatever the case, Julio Cortázar left us, prematurely and unexpectedly, thirty years ago. His sudden disappearance somehow emphasized the unique traits of his previous presence—Cortázar was a strange character, even physically, wide-eyed, hirsute, chain smoking. He was an intellectual in the full sense of the word, like perhaps only Latin American intellectuals can be—curious, all embracing, injuriously knowledgeable. But above all he was a non-conformist, always questioning the order of things, always looking for an alternative route, for a crack in the mold. The blue prints of his quest, his literary oeuvre, is the greatest gift he could have left us. For that, in your centenary, thank you, Julio.

Published in the WEEKender supplement of Sint Maarten’s The Daily Herald newspaper on Saturday August 30, 2014.