Few writers enjoy a greater reputation in Western literature than Albert Camus. The poster face of commitment and elegance, of artistic and analytic talent, of grace and wits, Camus is to the intellectual establishment what a crossover between Humphrey Bogart and Steve McQueen would be to the world of cool: old-school and trendy in the same measure, effortlessly cult and hipster all at once, a distant ideal, all the more unattainable because he actually existed.

Shrouded in the unquestionable veil of his legend, however, is his literary career, cut desperately short by his death in 1960. Guided by a major concern for the meaning of life, he examined with the curiosity (or maybe it was anxiety) that characterizes those who are too clever for their own good every literary form available, from philosophical essays to critical ones, from full-length fiction to short stories to original scripts, modern adaptations and translations of contemporary works. But—let’s be candid—what’s so special about Camus in the first place?

There are two different answers to that question. On the one hand, there is Camus-the-person, the young intellectual fighting for the good guys in the most polarizing war in living memory (WWII) the well-intentioned philosopher looking for analytic justifications to a seemingly absurd situation, the handsome brains to a resistance movement in France that, though popular, was desperately ineffective, the Algerian Pied-Noir stuck in the horrors of his country’s struggle. 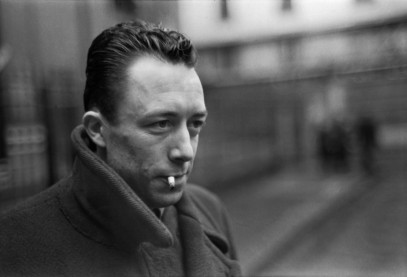 Born and raised to a nearly destitute family of French and Spanish descent, Camus enrolled at university, played football for his local club, had his ambition of becoming a professional athlete curtailed by a bout of tuberculosis, completed a degree in philosophy, married for the first time, and had his work published in a number of magazines and newspapers, all in Algiers. In other words, Camus was made in and by Algeria. But he was also a Pied-Noir—a French citizen, quite distinct from the Arab population. When the fighting between the two sides (and the boundaries defining those sides were by no means clear cut) started, he was caught right in the middle of a rift that would prove unbridgeable: a lifelong advocate of Algerian identity and a believer in autonomy, he fell short of backing self-determination and above all abhorred the thought of a conflict that, no matter how you tried to mask it, was ultimately nothing other than a civil war.

Fifty-five years after his death Camus is still idolized, largely thanks to a reputation that has been cemented in popular culture by the Nobel Prize in Literature, which he was awarded in 1957 at the age of 44—the second youngest writer to earn the prize behind Rudyard Kipling and one of only a handful to have won it before turning 50. Ever a politicized organization, there is every likelihood the Swedish Academy opted for Camus three years into the Algerian War as a means to bring into focus the trouble that assailed the north African country. Camus—no stranger himself to the subtleties of communication—delivered a measured though troubled message during the awarding ceremony, but when he was confronted by a young man to speak up for justice in Algeria, he produced a lapidary sentence for which he was severely criticized at the time: “people are now planting bombs in the tramways of Algiers. My mother might be on one of those tramways. If that is justice, I choose my mother.”

So much for Camus-the-person, but what about Camus-the-writer? Does his work live up to its reputation?

The cornerstone that holds together much of Camus’ literary production is his own personal take on existentialism, which he dubs absurdism, and which he sets out in more or less lucid terms in his 1942 essay, The Myth of Sisyphus. Like most philosophical treatises, The Myth is dense, difficult and evidently academic. Unlike most philosophical treatises, though, some moments are pure gold. Camus doesn’t wait long to deliver the first of these, right on the opening page, when he claims, rather nonchalantly: “There is but one truly serious philosophical problem, and that is suicide.”

Over the course of the next 100 or so pages, Camus offers an analysis of whether or not life is worth living—with the caveat that what Camus considers life to be differs quite drastically from what everyman might think of their own daily routine. For Camus there is a major discrepancy between an individual’s expectations and the reality of any given situation, and in this gap lies the tragic fate of mankind, destined to face constant disillusion or else to realize that there is no hope. Following the edicts of reason, a hopeless life wouldn’t be worth living—but confronted with the abyss of suicide, the absurd man chooses to forego reason, takes a leap of faith (without the faith) and opts to feel, to experience, instead, to remain suspended, as it were, on the verge of jumping, without ever actually doing it.

If The Myth of Sisyphus provides the theoretical clues to Camus’ thought, The Stranger—also published in 1942—can almost be considered a case study of the absurd man and his place in society. Contrary to expectations (surprise, surprise), the protagonist of The Stranger, Mersault, the man who best exemplifies absurdist values in Camus’ universe, is anything but appealing. Camus’ absurd man—a Godless, hopeless, factual man—lives only for the moment and questions everything beyond what his senses can perceive at any given time. Socially awkward, emotionally insensitive, sentimentally detached, Mersault lives an egotistic life, but does it not in isolation but rather in the midst of a world regulated by standard social conventions. Consequently, Mersault is judged and cast aside long before he commits the crime that lands him on death row.

This is all not to say that The Stranger isn’t persuasive: it is, not in getting us to act as Mersault but in getting us to gobble the book in no time. Yet if The Myth of Sisyphus is thorough (and, at times, lyrical) in its assessment of absurdist philosophy, The Stranger is necessarily simplistic in its presentation of the fictional arguments. In order to truly become acquainted with Camus’ worldview you must delve into the complex universe of his novels, such as The Plague.

It has often been argued that the plague acts as a metaphor in Camus’ novel for Nazism, invasion and the ailments of World War II. While the analogy between war and plague is repeatedly pursued by Camus himself in the book, I would suggest Camus’ intention is actually to alter a regular instance of everyday life with the irruption of a truly exceptional occurrence (such as, but not exclusively limited to, Nazism, invasion, war, or, even, the breakout of a pandemic everyone thought extinct). It is in these extraordinary circumstances when living, breathing, sentient humans—regular humans like any other—are driven to the realization that we live in an absurd world and are forced to commit what Camus deems “philosophical suicide,” abandoning reason and staying suspended perennially in the moment immediately prior to jumping off the cliff.

The Plague is particular for a number of reasons, not least the eminently philosophical foundations that guide its course—hardly an unusual occurrence in French or German literature but certainly a less common one in the English language. Inevitably, then, the novel is situational and character-driven. The wealth of characters in The Plague points at Camus’ commitment to paint as complete a picture of his scenario as possible in the novel—though this derives in a detailed analysis of the very different motivations that spur characters is totally unconnected situations, merely brought together by calamity. 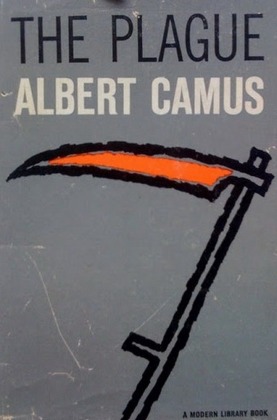 As the novel moves through the effects of the pandemic on the population—from denial to defiance, exile and isolation, panic and despair, from abstraction, to conceptualization and even indifference—Camus explores the inner landscape of his characters with almost obsessive detail. This, added to the recurrent interventions of a narrator whose style has grown—perhaps inevitably—outdated and distancing, at times turns The Plague into a tough read. But whatever stumbling blocks are thrown on the way by the philosophical inclinations of the work, Camus’ stylish, effortless, beautiful writing style invigorates the reading experience far more often than not.

Right at the heart of The Plague lies the core of Camus’ absurdism: faced with a breakout that is well beyond anyone’s means to control, the population of Oran has to make an impossible choice: either they accept there’s nothing to do and do nothing at all, or they keep putting up a futile resistance. The reasonable thing to do—according to Camus—is to accept the situation and roll with it, but the people of Oran rally behind their lost cause, not inspired by any sense of heroism or hope, but simply by their “certitude that a fight must be put up.” In a world devoid of future, joy or illusions—indeed, in a world even devoid of love—people act because they must.

And yet, we keep reading The Plague, much like we keep reading The Stranger, not because we must but because of Camus’ beautiful descriptions of the town of Oran, because of his insightful exploration of human nature, because of his ability to put together accurate sentences, poignant and breathtaking all at once. The world in the XXI century might not be what it was in the immediate aftermath of World War II, but moral inquiries and philosophical postulates to one side, it certainly is all the better for Camus’ literary exploits.

Published by the Weekender supplement of Sint Maarten’s The Daily Herald on Saturday September 11 2015.