In the world of literature, 2016 is a special year: you must have heard that Shakespeare’s four hundredth death anniversary was officially celebrated on April 23, the same day as Inca Garcilaso de la Vega’s, the first writer from the New World, and just one day after Miguel de Cervantes’. The fact that four centuries after their death the main works of these three writers—Inca’s General History of Peru, Cervantes’ Don Quixote and Shakespeare’s dozen plays or so—remain seminal is absolutely remarkable, and comparing the three might be a little like comparing soursops with jackfish and licorice. Nevertheless, as I found myself coincidentally ambling along London’s South Bank on April 23, absentmindedly strolling past the rebuilt (and relocated) Globe theater and heading towards the National, I thought it was extraordinary (and extraordinarily touching) to see dozens of big screens installed within close proximity of one another, each showing a different Shakespeare play and, most amazing of all, each surrounded with small—let’s not get carried away—pockets of people delightedly, sometimes just curiously but some others also intensely following the plays. I stopped briefly for Cordelia, caught Brutus’ ploy far in the distance, was amazed at the popularity of King John and finally just got there in time to witness Romeo’s wretched kiss on the anaesthetized lips of his beloved, but all along I wondered what is it that still attracts us so much to Shakespeare? Could a free little festival like this be organized around Cervantes’ work? Would people attend? Perhaps most importantly, would it be worth it?

Ahead of anything else a quick consideration concerning genres: Shakespeare’s plays are, of course, meant to be performed in front of an audience while Cervantes’ works are intended for private consumption, not to be declaimed from some stage. This key distinction means that Shakespeare is clearly better suited for a spectacle, and his longevity is also down to the continued success of the theater as a form in western cultures (though we could well be before a case of the hen and the egg here). Cervantes, on the other hand, pioneered the novel form, exploring different formats and styles that went from the traditional pastoral tone of La Galatea to the morality of his Exemplary Novels to the unbounded adventures of his final work, Persiles. In the process, Cervantes invented a character that, like Sherlock Holmes or James Bond many centuries later, would garner far greater fame than its author: Don Quixote. Across languages and cultures Don Quixote is known and used as a reference for slightly deranged, antiquated, somewhat romantically impossible enterprises. And yet, while Cervantes has managed to permeate the language—quijotesco, quixotic, donchisciottesco are all standard terms in Spanish, English and Italian, for instance—Don Quixote, like Robinson Crusoe or Moby Dick, has instilled itself in our consciousness by a curious process that doesn’t necessarily involve reading the text. 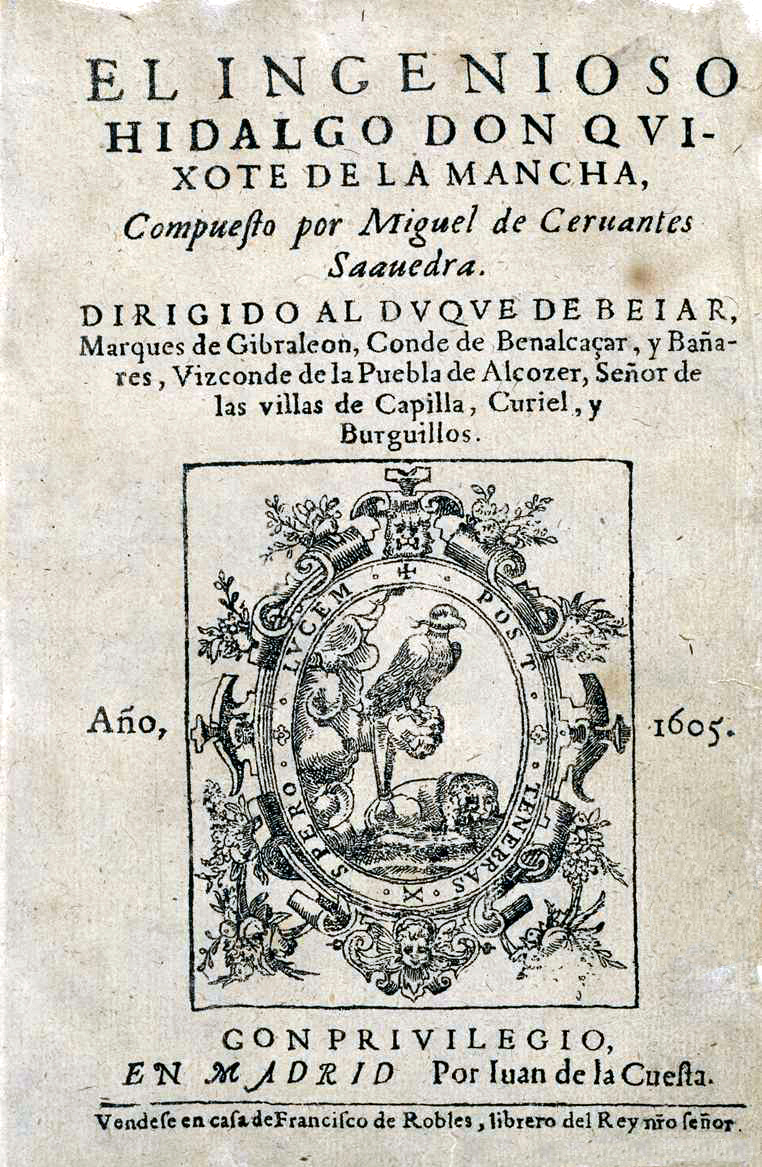 The upshot of this is that we all know roughly what Don Quixote is about—a crazy old man who sees giants where there’s nothing but windmills—but, by the same measure, we have also allowed the details to slip between the cracks. When it comes to literature, however, surely it is precisely the details, the subtleties, the context that makes all the difference. Thus, the question is whether in absorbing Don Quixote so fully into our culture we have actually done ourselves a disservice: would we be better off acknowledging that we don’t know the first thing about Don Quixote and reading it from scratch? And, if so, why isn’t this a more popular alternative? (After all, think about it, how many people do you know, yourself included, who’ve read The Ingenious Gentleman Don Quixote of La Mancha?)

There’s two very obvious, if somewhat banal, reasons why Don Quixote might not be quite as popular as its reputation suggests: first of all, the two bulky volumes that comprise the novel are each roughly four hundred pages long, and together they certainly make for a formidable read. While no book should ever not be read just because it’s too long, the realities of modern life often conspire against big bricks—especially if they are written in the archaic style germane to seventeenth century fiction!

And yet, neither of these factors should really prove significant: not for English readers, anyway, who have relatively modern translations ready at hand to help them bridge the gap to Cervantes’ age, and certainly not in an environment where good old-fashioned bricks are regularly popularized by the likes of R. R. Martin or Marlon James. Hence, the real question is whether Don Quixote is that long for a (good) reason, or, put differently, whether the novel is worth reading at all.

The answer to such simple question must unfortunately be nuanced and relative if it is to be of any use at all. Published in 1605, Cervantes’ first literary success came when he was fifty-eight years old. This fact not only shapes the style of Don Quixote, a light-hearted parody of medieval tastes and attitudes, it actually dictates the structure and contents of the work. After a life-full of extreme experiences—Cervantes served in the navy, almost lost his left hand in the Battle of Lepanto, was held captive for five years in North Africa, spent three years in jail in Seville and was thought to have killed a man in a duel in Valladolid—the author was clearly keen to show in his text the extent of both his talent and his knowledge. This makes of the first part of Don Quixote a relatively uneven and fragmented text, which though irresistibly appealing often seems to lose its course.

The two most evident examples of these apparent digressions are often cited as standalone novellas—one pastoral, one amorous—inserted by Cervantes into his larger text for no other reason than to boast his ability to excel at various styles. That Cervantes was proud of his craft is beyond doubt. Indeed, in some sense it was precisely this thirst for personal recognition, quite unusual at his time, which enabled him to rise above the rest. Following Don Quixote’s tremendous success, a second part of the adventures was published in 1614, almost ten years later. The problem was that this second part hadn’t been written by Cervantes but rather by a different writer under the pseudonym of Alfonso Fernández de Avellaneda. By the early seventeenth century the notion of authorship had already made its mark in Europe, and though emulation, inspiration, plain appropriation and other early variations of fan fiction were generally held as a form of praise, Cervantes was not at all flattered by Fernández’s gesture.

His response was to put his head down and gestate the true second part of Don Quixote, which is not only ruthless in its treatment of the other second part of the book but also finds ample space to acknowledge and redress the inconsistencies of the first part. Indeed, in a wonderful instance of metaliterature Don Quixote finds himself reading his own story at some point, which is in effect being written at the same time as he reads. Cervantes’ second part of Don Quixote does what every sequel should do, it corrects the mistakes of the first part and expounds the main points of the work, it further develops the characters in the story and enhances their traits, it puts previous passages in perspective, it simply picks up the first half and makes it better. However, to say that the second is the best of the two (or even three) parts of Don Quixote is to miss the point entirely, because while it is undeniably true that Cervantes had become a more accomplished storyteller over the ten years that separate the two volumes, in order to grasp the magic of Sancho Panza’s progression toward quixotic delusion, in order to be physically affected by Don Quixote’s agony and death it is necessary to undergo a process of rapprochement that takes up approximately eight hundred pages.

Like any book, though, this is just one—perhaps the ideal—way of reading it. There are, I’m sure, infinite ways of approaching Don Quixote, and I just want to finish with an alternative—and a confession: I have never read Don Quixote from cover to cover. My experience with it has been a rather more postmodern one, choosing sometimes at random, sometimes deliberately, one (or two, or three, or more) of the 122 chapters that form the book and reading them casually. On one level this has irreversibly ruined for me the experience of reading the full work linearly. On the other hand it has afforded me hours of joy in what is, quite possibly, my favorite read of all. But what I wish to highlight is not so much a personal anecdote but the versatility of a literary work that is four hundred years old. Cervantes’ greatest creation can be read, coherently and successfully, adopting modern habits or random sequences. And that is simply genius.

published in the WEEKender supplement of Sint Maarten’s The Daily Herald on Saturday June 4, 2016.