Throughout 2018 we’ve been commemorating the hundred years of the end of the First World War by looking at a number of works of literature spawned by the torrid experience. Thus far we have explored contemporary accounts in England (Siegfried Sassoon’s diaries and Ford Madox Ford’s trilogy, Parade’s End), contrasted responses in France (Henri Barbusse’s Under Fire and Louis-Ferdinand Céline’s Voyage to the End of the Night), looked at the Italian perspective (admittedly cheating by pairing Hemingway’s A Farewell to Arms with Emilio Lussu’s A Year on the High Plateau) and analysed the events in Russia through the eyes of two Nobel Prize winners, Boris Pasternak (Doctor Zhivago) and Alexandr Solzhenitsyn (August 1914 and November 1916). To bring the series to an end, I want to compare two drastically different depictions of what the war was like for German soldiers in Ernst Jünger’s Storm of Steel and Erich Maria Remarque’s All Quiet on the Western Front.

For Germany the Great War was a traumatic affair at many levels, not least politically. After four years of fighting a war that was meant to last six months, the results couldn’t have been more catastrophic: not only did Germany not win the Great War, the country was left in social and political disarray; the Hohenzollern, a dynasty that had ruled over Brandenburg, Prussia and eventually Germany for more than 500 years, were forced to abdicate and seek asylum in (oh, irony of ironies) Holland; the tidal wave of social unrest that destabilised Russia spread to Germany, resulting in a brief but brutal revolution; and all of that before quantifying the enormous human loss (two million killed, four million wounded) and the vindictive terms spelled out in the peace treaty of Versailles in 1919.

This is the context in which Ernst Jünger published his Storm of Steel (1920), a remarkable book not only due to its early release date but, most strikingly, because of the uncritical attitude it adopts towards the war. Printed privately long before the great fashion of war novels swept through the publishing world, Storm of Steal provides the reader with a punctilious account of the cruel realities of trench warfare, lauding the resilience and the accomplishments of the German people in the process. Indeed, if Storm of Steal is a tribute to those who lost their lives in battle (the book is touchingly dedicated ‘To the fallen’), it achieves it not by undermining the cause for which they perished but rather by depicting this as the greatest conflict the world had ever seen – which, of course, in a way it was.

Antiwar sentiment was rife throughout Europe long before the 1918 armistice was signed, and indeed it was generally assumed that the victor in the fields of battle would really be determined by the outcome of the home front in each of the warring nations. While Sassoon’s poetry in 1915 and early 1916 – like that of Robert Graves, and many other war poets, was full of enthusiasm and patriotism – by the time the Battle of the Somme was in full fledge, in the summer of 1916, the voices of dissent were clearly audible in England, in France and beyond. In Germany, however, despite defeat and humiliation, Jünger’s memoirs sought to highlight the value of an army of men who, by and large, remained true to their duty, faithful to their motherland, and staunch in their resolve.

As a volunteer, later promoted to a junior officer, Jünger candidly takes the reader through the whole spectrum of emotions that come with the experience of war, from the inebriating sense of expectation and excitement ahead of battle to the fear and the numbness that accompany him as he awaits the inevitable to happen during the thunderous minutes when his dugout is shelled time, and time, and time again. But while Jünger’s narrative is similar to that of many other volunteers who enrolled looking for action and danger, it is his unwillingness (or his inability) to condemn the war which is most extraordinary. 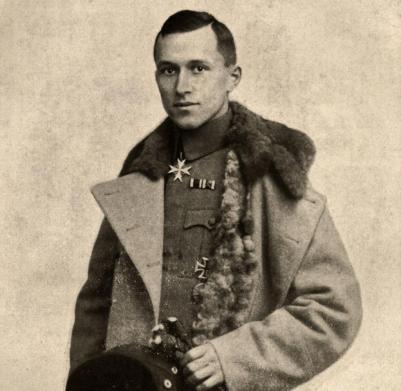 Jünger engages in all the clichés that feed his patriotism, from the feeling that his homeland is so beautiful it ‘was eminently worth our blood and our lives’ to the comfort that the ‘country was not short of good fighting stock’. Like many others, he also revelled in the daredevilry of raiding enemy trenches or making night-time expeditions into No Man’s Land. But even though he proved an able officer, and he was perfectly capable of understanding the tectonic shift that came after the Battle of the Somme, when the front became practically static, despite spending four years in the trenches, despite being wounded repeatedly, despite experiencing gas warfare and witnessing the carnage of war, Jünger isn’t sufficiently engaged on a moral level to recognise how pointless, at the very least, all this violence, all this murder truly is.

On the contrary, even after the failure of Germany’s final offensive in the spring of 1918, Jünger still emphasises the good morale of his troops, eulogises the new breed of fighters reaching his ranks daily, ‘instinctively brave’ volunteers, and remains steadfastly determined to stand firm, even though ‘everyone knew we could no longer win’. That is precisely what differentiates Storm of Steel from Remarque’s masterful novel, All Quiet on the Western Front (1929), the fact that in his fictionalised account of the war Remarque allows his characters to rectify.

Published almost a decade after Storm of Steel, All Quiet on the Western Front was an immediate publishing sensation, selling by the millions all around the world. In fact, it was Remarque’s book which in a way created the great thirst for war novels that over the next few years led to the publication of dozens of tomes. Remarque’s most incisive move is to make his protagonists simple soldiers, rather than officers. In this respect, All Quiet on the Western Front aligns itself with Barbusse’s Under Fire, in that they create what could be described as a democratic image of the war, a picture that tells the story of the overwhelming, unprivileged, majority – and a ghastly, distressing image it is.

Remarque’s 1929 novel was adapted into a Hollywood film in 1930. Photo: airandspace.si.edu

Unlike Under Fire, however, which was published in the thick of the war with an eminently political purpose in mind, All Quiet on the Western Front focuses on the human aspect of the tragedy, portraying its long-lasting effects from an individual perspective. Perhaps inevitably, this makes for a sentimental read, as Remarque uses every trick in the book to bring his characters closer to the reader. All Quiet on the Western Front is beautifully written, with an acute sense of rhythm and a craftsman’s care for words which prevent it from slipping into the sort of corny discourse that could so easily plague a work of this kind.

Structurally, the novel travels with a group of teenage volunteers, many of whom are persuaded to join the army by their schoolteacher, as they experience the thrill and horrors of war first-hand. Tellingly, the young soldiers face high-risk situations throughout the tale but whether they come in the shape of night-time escapades into enemy territory (in search of pleasurable company) or as part of a manoeuvre involving the rest of the army, the impact of these actions is only felt in the protagonists themselves, making practically no difference to the outcome of the war. In other words, Remarque forces the reader to go through a catalogue of anecdotes, one more terrifying, exciting, and scarring than the next, only to bring home the full extent of the futility of this war.

As Paul Bäumer, the narrator of All Quiet on the Western Front, grows old beyond his years, progressively more tired, more disillusioned with the war, as he loses one by one his old school mates and his newfound friends, it becomes obvious that his experiences will never allow him to live a normal life again. It is a feeling often expressed by Siegfried Sassoon in his diary, but one that Ernst Jünger seems totally unacquainted with. Maybe the key to the discrepancy lies in the nine years that separate the publication of Storm of Steel from All Quiet on the Western Front, but the fact remains that while Remarque writes with great compassion about a generation he recognises to be inevitably lost, Jünger is bent on making a point about the dignity of an army that, while unable to come out of the war victorious, nevertheless remained unvanquished.

These two views might not be altogether incompatible, but they are incongruous – and, perhaps most damningly, they reflect the huge rift separating not only officers from soldiers but the ruling class from the layman. It was a recipe for disaster in a society charged with the momentous task of reshaping the nation. And their failure to do so carried consequences that went far beyond the confines of Germany or the First World War.

Published by the WEEKender supplement of Sint Maarten’s The Daily Herald newspaper on Saturday January 5, 2019