In current terms you could say that alert levels in Anguilla had been sitting steadily at severe mauve for more than a week, when the first Red Devil paratroopers beached at Crocus Bay and Sandy Ground in the small hours of the morning on Wednesday March 19, 1969. It was the culmination of Operation Sheepskin, the plan put in place by the British Prime Minister Harold Wilson to defuse the tension that in Anguilla had risen to unprecedented levels since the government envoy, William Whitlock, had been kicked out of the island at gunpoint just eight days earlier.

Those eight days turned out to be the swansong of the Republic of Anguilla, a rebel state that over the course of 20 months contrived to force the hand of the international community. In the previous two years, Anguilla had experienced so many ups and downs a graph of its journey would resemble the electrocardiogram of a person with acute arrhythmia, and yet, despite the obstacles and the many setbacks they confronted, Anguillians and their political leaders displayed so much resilience that in the end they could not be brushed aside.

Anguilla’s struggle to break the bonds that since 1825 shackled it to St Kitts could only be fought thanks to two major strategic coups: in the first place, Anguilla needed to give its cause some measure of visibility; and then, a stable environment had to be created on the island which could be sustained over a prolonged period. As a small territory with hardly any infrastructure at all and an economy heavily dependent on remittances, Anguilla entered a race against time the moment Ronald Webster, Atlin Harrigan, and hundreds of others marched to the Wallblake police station and kicked the 17-man task force out of the island on May 30, 1967. But something more was required to offset the vulnerability of a tiny spec of salt in an ocean of hostility.

The first decision taken surreptitiously by a small group of Anguilla’s most influential citizens reeked badly of desperation, as sixteen men boarded the schooner Rambler and attempted to take Basseterre, depose Premier Robert Bradshaw, and install in his place a sympathetic government headed by Billy Herbert. The mission failed spectacularly, but its aim was accomplished by default when Bradshaw became so paranoid he spent the following month persecuting old enemies in St Kitts. Anguilla had bought its first dose of time – and boy, did it come handy.

A 15-member Peacekeeping Committee was put in charge of Anguilla’s internal affairs, while in New York Jeremiah Gumbs was charged with mustering some outside help. In an effort to emphasise the legitimacy of the people’s revolt a referendum was held on July 10, with an overwhelming victory of 1813 votes to 5 for secession. Anguilla’s unilateral declaration of independence followed soon thereafter, with a simple constitution drafted by the Harvard Law professor Roger Fisher – one of Jeremiah’s recruits – and a quaint flag designed by Lydia Gumbs. Thus, the Republic of Anguilla was born.

Ronald Webster made it expressly clear from the beginning that independence was only a last resort for Anguilla. What the island’s leaders really wanted was some sort of association with an English-speaking world power – other than St Kitts, of course. Britain was the natural option, but alternatives were sought with the governments of Canada and the United States, and though nothing really came of it, visibility became an item Anguilla could tick off its wish list.

Once it became obvious Bradshaw would also fail to persuade the neighbouring Caribbean nations to assist in a military operation against Anguilla – St Kitts had a small army of several hundred men, but no navy – the face-off between the rebels and the government of St Kitts turned into a waiting game. The expectation in Basseterre, and perhaps also in London, was that eventually Anguilla would run out of steam – namely, money, provisions, perhaps even patience. But life sometimes has its own ways, and for the Anguillian cause those ways materialised in the form of the so-called San Francisco group, a rather loose assortment of free thinkers who supported the island – the proverbial underdog, if there ever was one – at the critical time.

Partly through the exploits of the San Francisco group, who sold special edition Anguilla coins and stamps for a substantial profit, partly through the sale of some of Ronald Webster’s extensive property in St Martin, Anguilla managed to balance its books by the end of 1967. Uneasy with the standoff, the British intervened but in typical fashion their intervention amounted to creating an institutional framework to do nothing. By mutual consent Bradshaw and Webster agreed to the presence of a Senior British Official on Anguilla from January 9, 1968 for the period of one calendar year, essentially closing the book on the Republic of Anguilla and leaving the island in some sort of protectorate-like agreement with Britain.

As the months went by, it became evident that the sole purpose of the presence of the Senior Official (Tony Lee was his name) was to allow time to take care of the differences between Anguilla and St Kitts. Except, these were precisely the sort of wounds time can’t heal. Ronald Webster and Robert Bradshaw were invited by the British government to hold talks in London in October 1968. By then Atlin Harrigan had distanced himself from Webster, who was warming up to the possibility of independence under the influence of a Baptist minister called Freeman Goodge and a Florida businessman called Jack Holcomb. Predictably, the London talks produced absolutely no results.

Almost as if they had pre-empted this, the British proposed to extend Tony Lee’s stay in Anguilla by another year. Perhaps recognising that Britain’s strategy was simply to let things cool off and allow them to slide back to their place, Webster rejected the proposal. Thus, in Anguilla in January 1969 it was the summer of ’67 all over again. The Republic made an uncanny comeback, and the Anguilla Council – the successor to the original Peacekeeping Committee – organised yet another referendum to be held on February 7. The outcome was almost identical to the first one: 1739 votes in favour, 4 against. 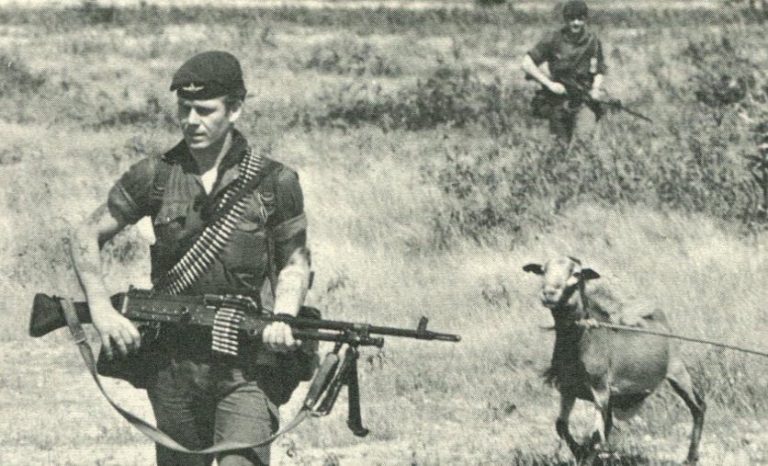 Faced with a proper crisis, the British were forced to act, although it did take them two months to send a delegation with a series of proposals that, to all effects and purposes, would return Anguilla to the colonial fold. The envoy, however, was William Whitlock, a man whose feel for the occasion was criminally absent. Armed with a ream of leaflets, Whitlock informed the Anguillian people of Britain’s intentions by tossing them by lumps at the crowd. He then proceeded to snub Ronald Webster, ignoring the motorcade that had been arranged to welcome him, and chose to have lunch in Sandy Hill instead. In other words, William Whitlock earned every ounce of his hosts’ anger when they decided enough was enough and sent him back whence he’d come from.

Whitlock’s account of the matter confirmed rumours that Anguilla had been overrun by Mafia-like elements. There was no two ways about it: the army had to intervene. But bad weather in England as well as a small accident in Bermuda delayed the operation by two days, so by the time the two British frigates reached Anguilla the press had already published the details of Operation Sheepskin. And yet, nothing could truly compromise the invasion of a territory that for 22 months had battled to be taken over.

Needless to say, when Tony Lee, brought back as Commissioner, and the rest of the British contingent carried out their investigations they found none of the criminal environment they had come to believe reigned in Anguilla. The only fishy characters they could use as scapegoats were Freeman Goodge, Jack Holcomb and a doctor Spektor, the only medic on the island, whose license had been rescinded in the US. They were expelled from Anguilla, more or less at the same time as Harold Wilson was being ridiculed in parliament for engaging in his own Bay of Piglets. By then, the Republic of Anguilla (part II) was a thing of the past – but the legacy of Anguilla’s most famous victory lives on to this day.

Published in the WEEKender supplement of Sint Maarten’s The Daily Herald newspaper on Saturday March 23, 2019.